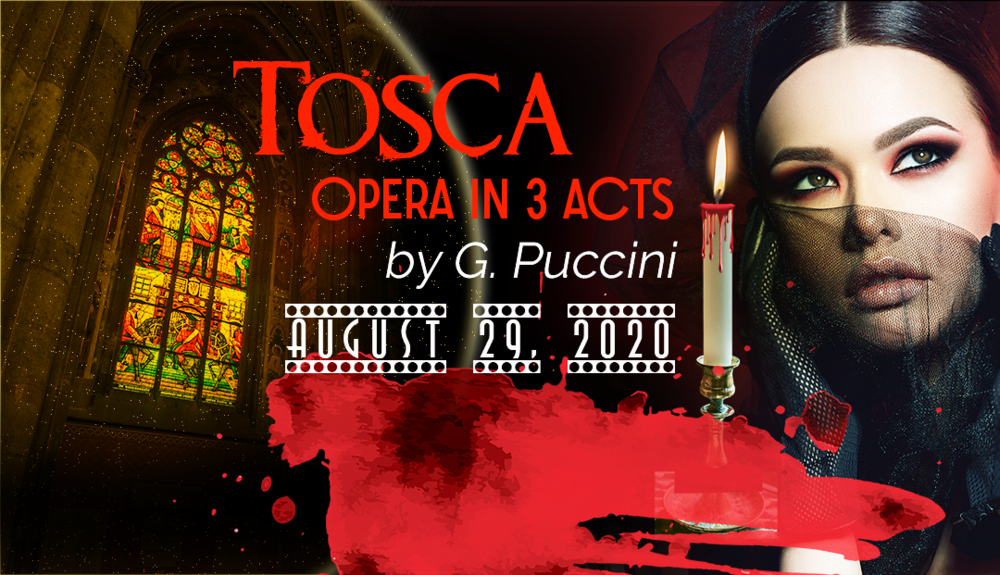 Tosca has long been a stalwart of the opera repertory. The reason? It deals in universal themes: politics, faith, passion, the corrupt misuse of authoritarian power for nefarious ends, the redeeming grace of love, and a statement about the life of an artist in the beautiful soprano aria, Vissi d’Arte.  No wonder directors through the ages have experimented with setting the opera in different times and places.

The Festival’s own Maria Todaro, inspired by both the work’s timelessness and the limitations of staging the work while ensuring the safety of performers, crew, staff, and audience, has taken Tosca out of Rome in 1800 and placed it in a time and place still to come. In this sci-fi future world, Baron Scarpia, the villain of the piece, possesses powers that let him exercise violence from a distance as he and the ruling institutions impose order through brutality and fear.

Act 1. In an imagined future time and place, an authoritarian government mixes politics and religion. Spearheaded by the chief of police, Baron Scarpia, all dissent is suppressed—typically through the cruel methods and mental contrivances for which the Baron is known. When the escaped political prisoner Angelotti seeks refuge in a church and comes upon the artist, Mario Cavaradossi, also an opponent of Scarpia and the regime, Cavaradossi agrees to help him. Cavaradossi is the lover of the adored singer, Floria Tosca, object of Scarpia’s obsessive lust. Suspecting that Cavaradossi is linked to Angelotti’s escape, the Baron sees an opportunity to use this to bend Tosca to his will.

Act 2. Cavaradossi is arrested. Tosca seeks out Scarpia and begs him to let her lover go. In her desperation, she reveals Angelotti’s whereabouts, thus implicating Cavaradossi in a capital crime. But Scarpia offers her a bargain: he will spare Cavaradossi if Tosca gives himself to Scarpia. Seeing no other solution, she agrees. Scarpia sends a command to the firing squad to use blanks instead of bullets, writes out a safe-passage for the lovers, then makes to embrace her. But in an act of self-defense, she kills him.

Act 3. Tosca and Cavaradossi are reunited in his prison cell, where she instructs him in how to play along with the mock execution, after which, she promises, the two of them will flee this planet and find safety somewhere else. Cavaradossi stands before the firing squad; they load their guns, aim, and fire. Cavaradossi’s body falls. Tosca realizes he is dead and that Scarpia has betrayed her. As troops arrive to avenge the Baron’s murder, she flees their grasp and leaps to her death.