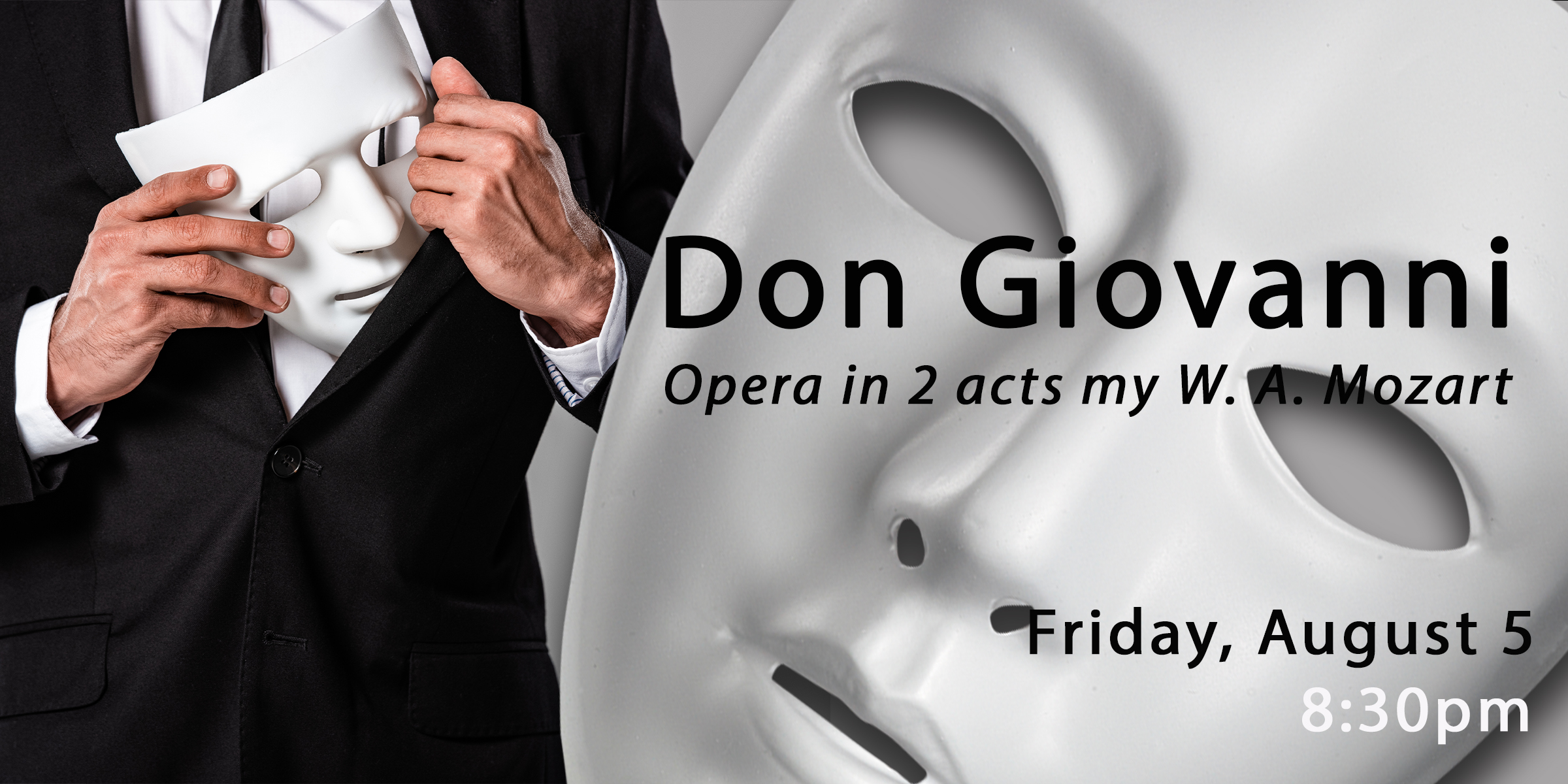 Admission
Entry to Performances are open to the public on a first-come, first-serve basis.
Tickets are non refundable.
Attendees may either bring a picnic blanket, their own chairs or rent one on site.
What else to bring?
Covid Protocols monitored and in Compliance with CDC regulations.
Handicap access, via Ava Maria Drive only (golf cart transportation to seating area) limited handicap parking. 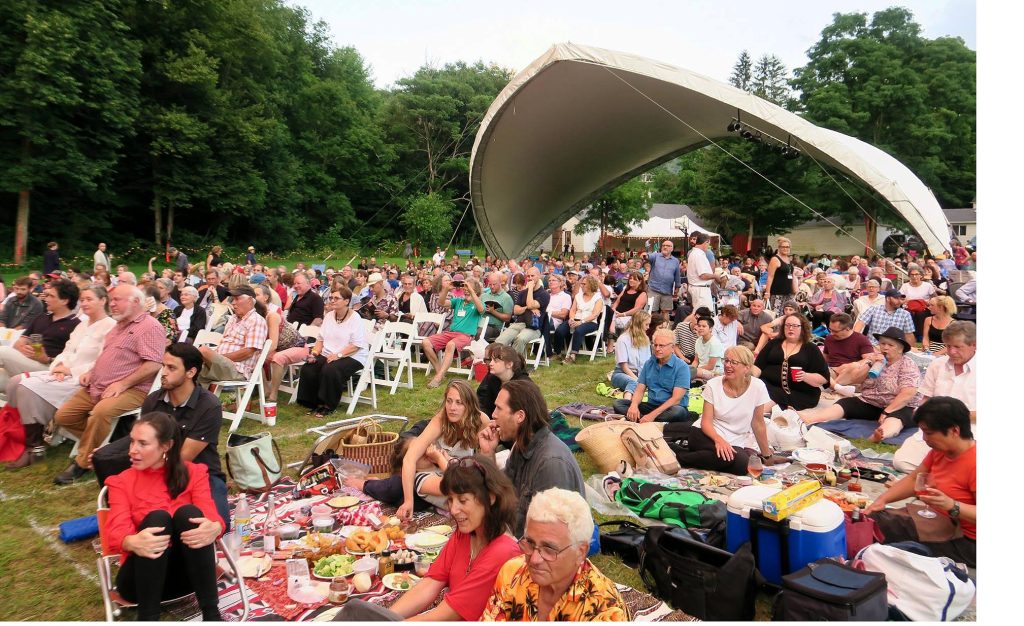 The world’s greatest lover dressed and Undressed in Armani—Mozart, high-fashion and infidelity- what a night it will be!

The hugely energetic and innovative Teatro Grattacielo will bring its special combination of great young singers, provocative staging and projections to open this seasons Phoenicia Festival of the Voice on Aug. 5th. They will open with Mozart’s arguably greatest opera, ‘Don Giovanni’, updated as a celebration of Spanish sic-kitsch set in 90s replete with air couches, Channel clothes, lots of jewels, and a bright white stage made of tiles with bulls. This Don Giovanni production is a dedication to Spanish cinematographer Pedro Almodovar and Cuban Bolero singer La Lupe.  On the stage we shall bring 5 bull sculptures made of neon along with a 5 piece couch  covered by Piet Mondian fabric. There will be a lot of gazpacho on the stage too The singers/actors driven by their most inner desires, of fears, live their lives in a continued state of suspension. A suspension of time. A suspension of senses. In a 90’s Spain, where food, sex and pop culture is a way of expression. 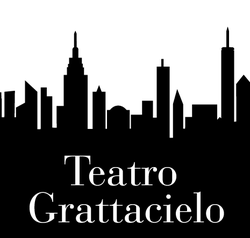 “ This Don Giovanni production is a dedication to Spanish cinematographer Pedro Almodovar and Cuban Bolero singer La Lupe. The singers/actors driven by their most inner desires, of fears, live their lives in a continued state of suspension. A suspension of time. A suspension of senses. In a 90’s Spain, where food, sex and pop culture is a way of expression. “
Teatro Grattacielo

Late at night, Leporello, the servant of Don Giovanni, is keeping watch while his master attempts to rape the daughter of the Commendatore, Donna Anna. She escapes and gives chase, trying to discover the identity of the intruder. The Commendatore rushes to her defense as Don Giovanni slays the old man and flees. Anna returns with Don Ottavio, her fiancé, and the two swear revenge. In the early morning, Donna Elvira, a young woman from Burgos, searches for Don Giovanni; she is one of his jilted lovers. Servant and master spy on her and when they all meet, Don Giovanni talks his way out of trouble and escapes, leaving Leporello to explain his masterʼs philandering ways. He shows her Don Giovanniʼs “little black book.” Around midday, Don Giovanni and Leporello happen upon the rustic nuptial celebration of Masetto and Zerlina. The latter excites Giovanniʼs fancy, and he invites everyone to his villa—the better to snare the young girl. The seduction is interrupted by Elvira, who denounces him and sweeps Zerlina away. Anna and Ottavio arrive, not yet recognizing Don Giovanni as the murderer. When Elvira interrupts again, Giovanni attempts to pass off her hysterics as madness, but the suspicion is planted. After he leaves to “help” Elvira in her distress, Anna realizes the truth, recounts the events preceding her fatherʼs death, and concludes with a call for vengeance.

Ottavio is then left alone to contemplate his love for Anna. Meanwhile, not in the least deterred, Don Giovanni orders Leporello to prepare a lavish party for all the neighbors. He is reminded to add more names to his famous list—Zerlinaʼs among them. The guests begin to arrive as daylight wanes. Zerlina vainly tries to soothe a worried, jealous Masetto. Don Giovanni renews his wooing of Zerlina, but her sharp-eyed fiancé intervenes.

As Giovanni leads the young couple into the villa, Anna, Ottavio, and Elvira enter wearing masks. They are quickly invited by the master to join the festivities. With the party in full swing, Don Giovanni leads Zerlina into an adjoining room. Her cries, however, bring everyone to her assistance. Don Giovanni tries to make Leporello seem like the offending villain, but no one is taken in. The three guests unmask, and the tone of the party suddenly turns accusatory. Surrounded and condemned, Don Giovanniʼs adventures seem at an end, but by a sudden intervention he once again escapes his accusers.

Later that evening Don Giovanni, after soothing a disgruntled Leporello with some coins, hatches his latest plot, this one aimed at Elviraʼs maid; it requires master and servant to exchange clothes. Elvira is lured away by the man she thinks is her beloved and the real Giovanni is left to serenade the maid. Just then an armed Masetto and his followers arrive in search of the fugitive. The supposed Leporello sends them off in all directions, personally disarms Masetto, and beats him. Zerlina finds Masetto crestfallen and aching, and she tries to comfort him by offering her own personal remedy. Leporello, still disguised as Don Giovanni, is trying to escape the deceived of Elvira when Anna and Ottavio and, a few moments later, Masetto and Zerlina converge upon him. Believing they have found Don Giovanni, they threaten him with a speedy death. Leporello reveals his identity and everyone is dumbfounded; Anna retires. With profuse apologies, Leporello manages to escape. Ottavio asks that Anna be informed of his determination to punish Don Giovanni. Elvira finds that in spite of her outrage, she still feels pity for Don Giovanni.

Later that night Don Giovanni and Leporello have sought refuge in a cemetery. The raucous conversation is interrupted by a ghostly voice from the statue over the Commendatoreʼs grave. In response to a doomful warning, Don Giovanni invites the statue, through Leporelloʼs terrified mediation, to come to Don Giovanniʼs villa for a pre-dawn supper. To the servantʼs horror, the invitation is accepted. The two return to the villa to prepare. Ottavio seeks to console Anna, suggesting marriage. Temporarily rejected, he charges Anna with cruelty. Anna protests her love and begs for patience. Don Giovanni eats supper while a wind band serenades him with popular operatic tunes of the day (including a snippet from Figaro). Elvira rushes in resolved to for give Don Giovanni and tries to persuade him to change his ways. He cruelly taunts her, and she leaves in despair. Moments later, her terrified scream is heard and Leporello rushes out to see what is wrong. He too screams in terror and returns shaken, announcing the arrival of the statue of the Commendatore. In deadly jest, the Commendatore asks if Don Giovanni will dine with him according to the rules of hospitality. Arrogant to the end, Giovanni accepts. Pressing further, the Commendatore demands repeatedly that Don Giovanni repent his sins, but he is refused again and again. Finally, Don Giovanni meets his death.

The other characters return searching for Giovanni, and Leporello tells them what has happened. They all point out the moral of the opera: This is the evil-doerʼs end. And sinners will die just as they have lived

This production of Don Giovanni is an interdisciplinary dialog between arts and artworks. We have created a 90s inspired “glass box” where time is suspended. The characters live and relate to each other through addictions, sex, food and pop culture in Madrid in early 90s.  Madrid was dominated by pop and film icons such as Madonna, Duran Duran and my beloved Pedro Almodovar. Together with them some minor, but yet very important public figures such as La Lupe-a Cuban American Bolero singer and Miss Shangay Lily, a pioneer Queer activist and social agitator in Spain’s incipient gay rights movement.

I am very happy to be bringing this production to Phoenicia Festival of the Voice this year since I believe that the fits well the progressive and creative community that has embraced this Festival since their beginnings. Don Giovanni is a story of our times and open to a lot of different interpretations. Mine draws inspiration from my youth and my very first loves: movies, pop culture, fashion and music.

“I am passionate about light, angles, geometry, human conditions and interdisciplinary arts. I bring these passions to my work”.
Stefanos was born in the beautiful city of Athens but grew up between 2 small towns in southern Greece. He describes his childhood as a world full of photographic memories: postcards of places, faces, and buildings. At age of 20, Stefanos moved to Italy to study architecture. He soon discovered his other great passion: opera.

From that moment on, his life entered a total immersion in theater and classical music, first as a student, then as a performer and now as a director

. I use Rococo references regarding the dramatic time of the opera. Studying the theatrical manner in which the fabrics were folded in that time period giving me the inspiration to essentially "dress" the setting. In our case though I have used a contemporary technological material such as polymer cellophane instead of velvet or brocade. I encounter Spain which is the dramatic setting of this opera through the tauruses which I reformed in the set design with the aid of light. 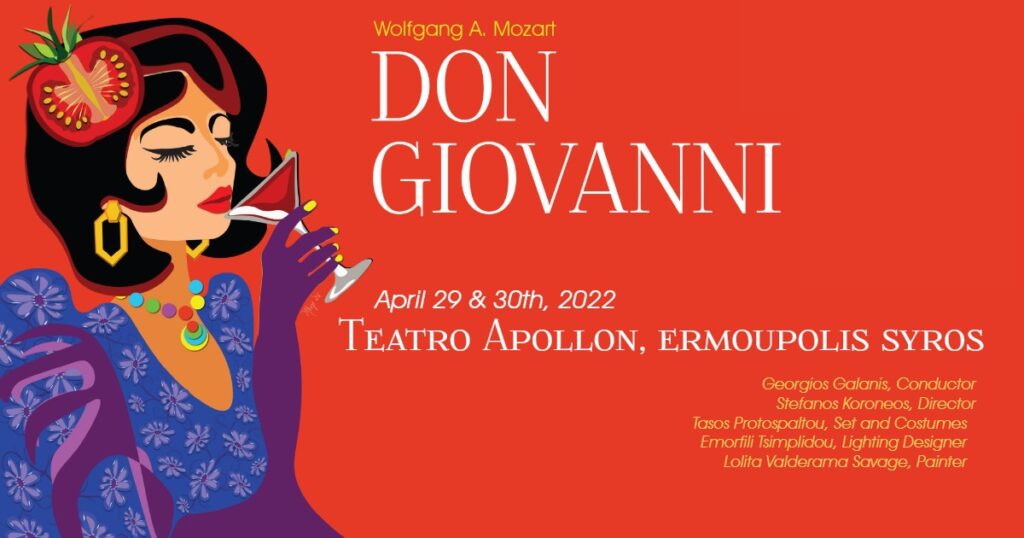 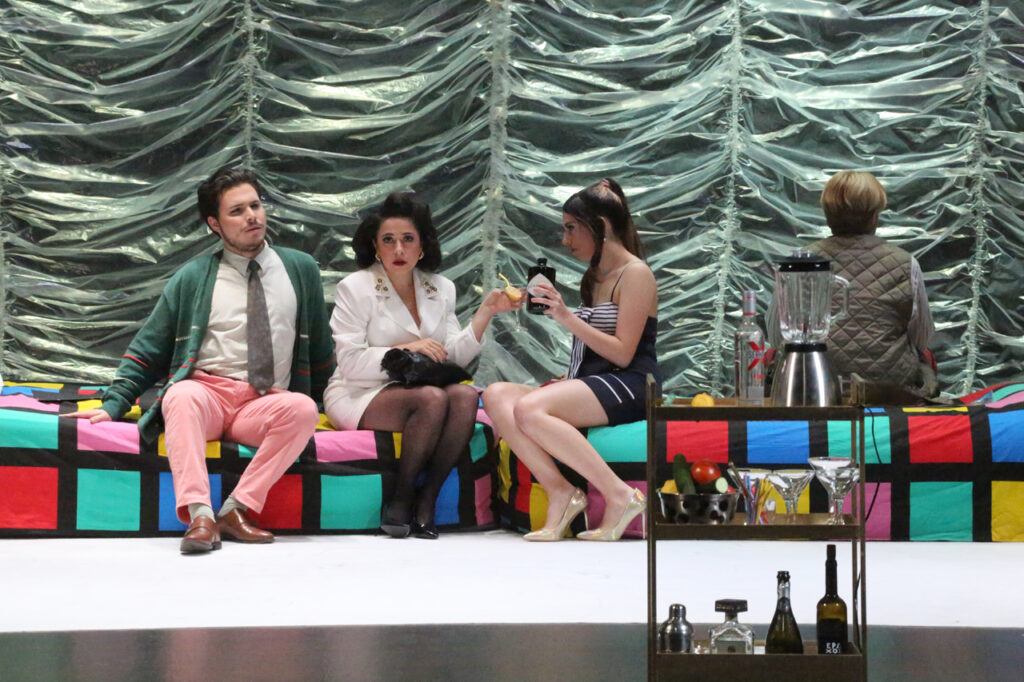 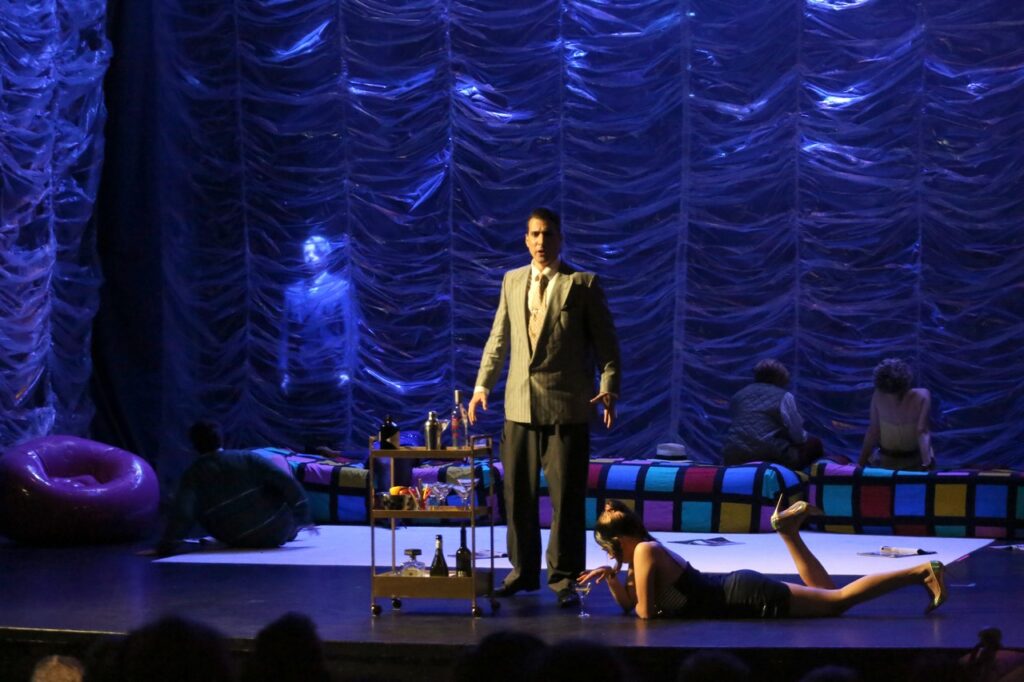