Art at the Festival

Home » Art at the Festival 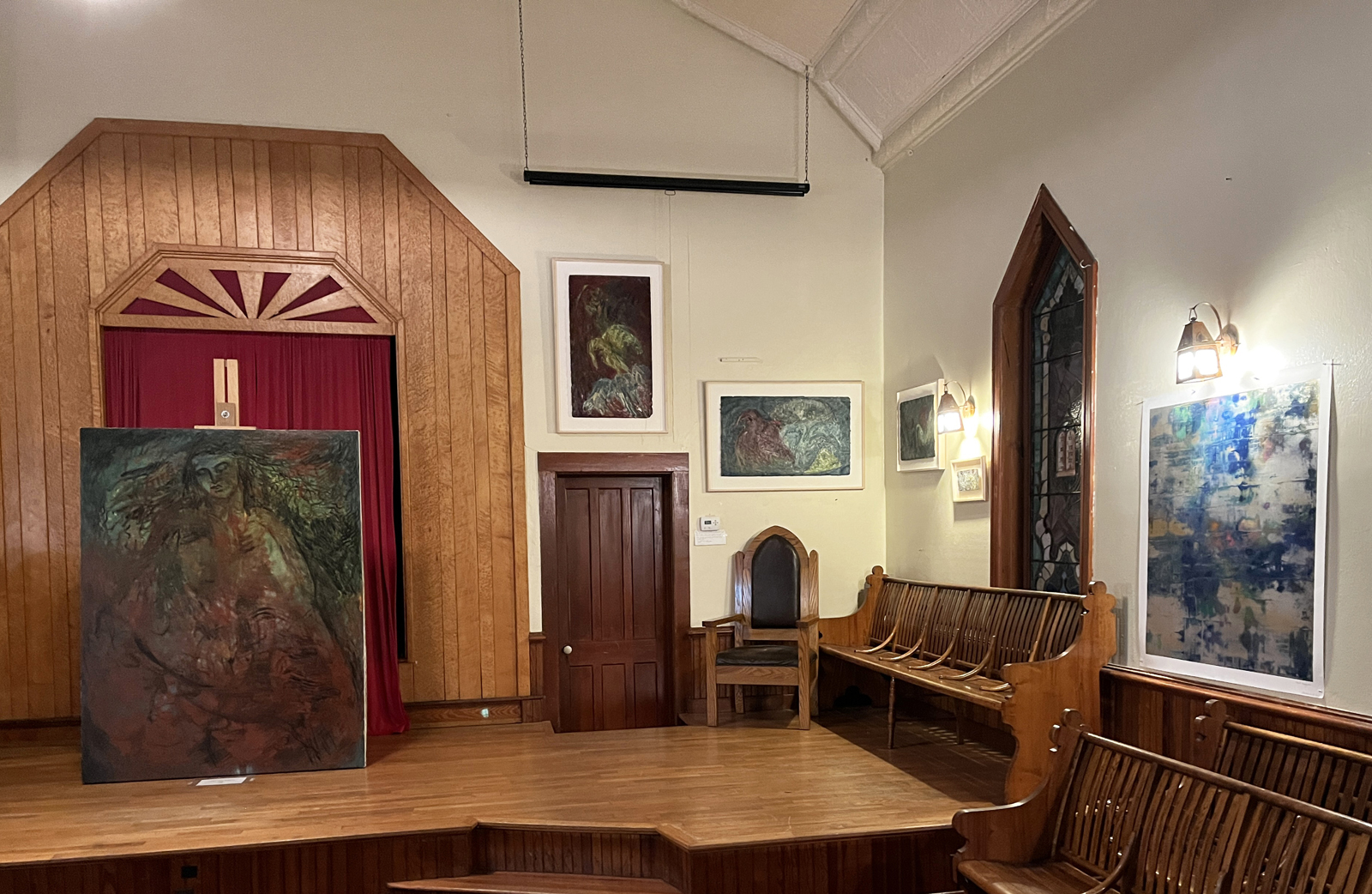 Private viewing for this exhibition can be arranged by appointment;
contact: s.weiss@phoeniciavoicefest.org

The opening will feature a very special dance performance by artist and dancer Heidi Stonier. 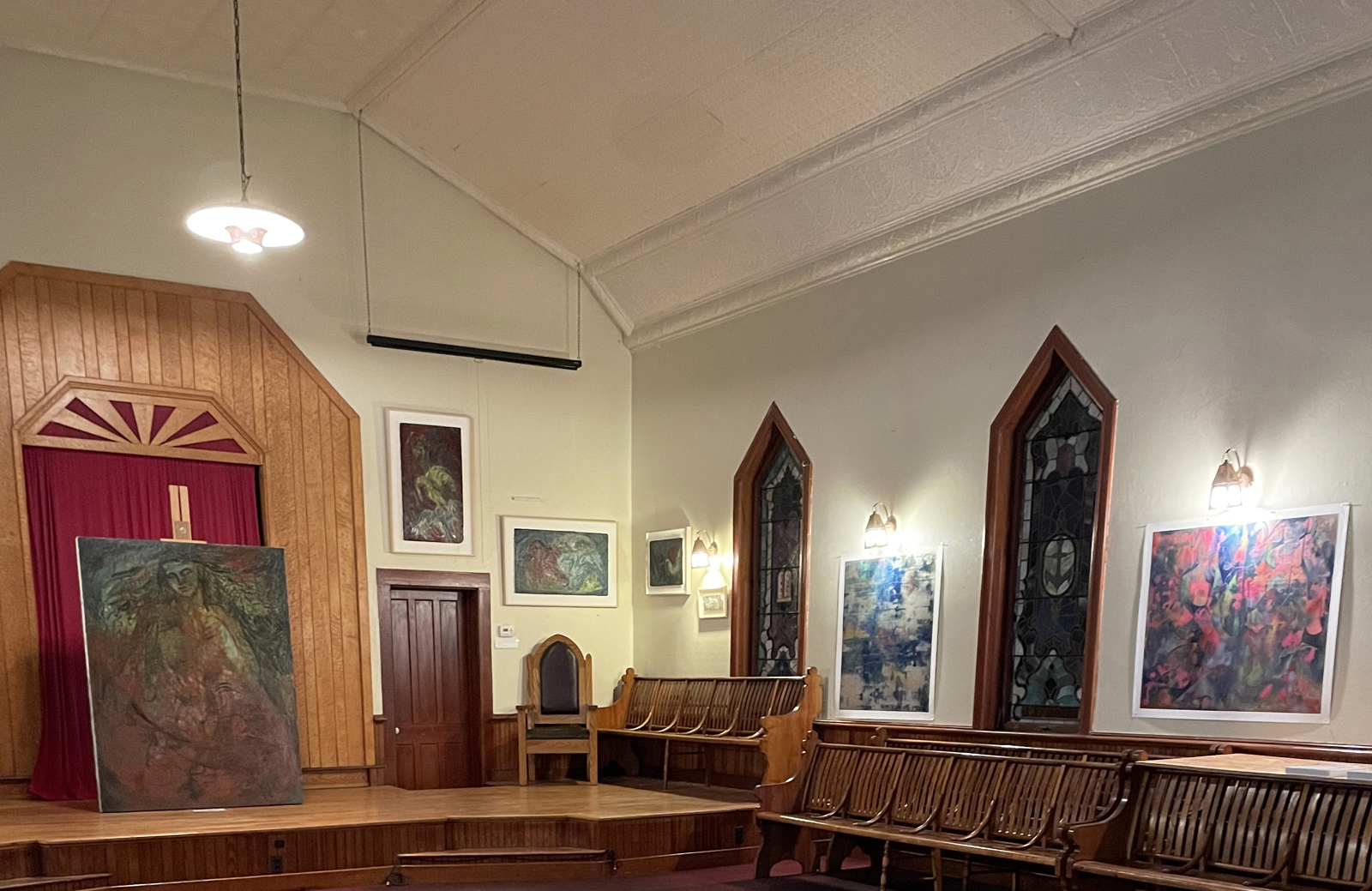 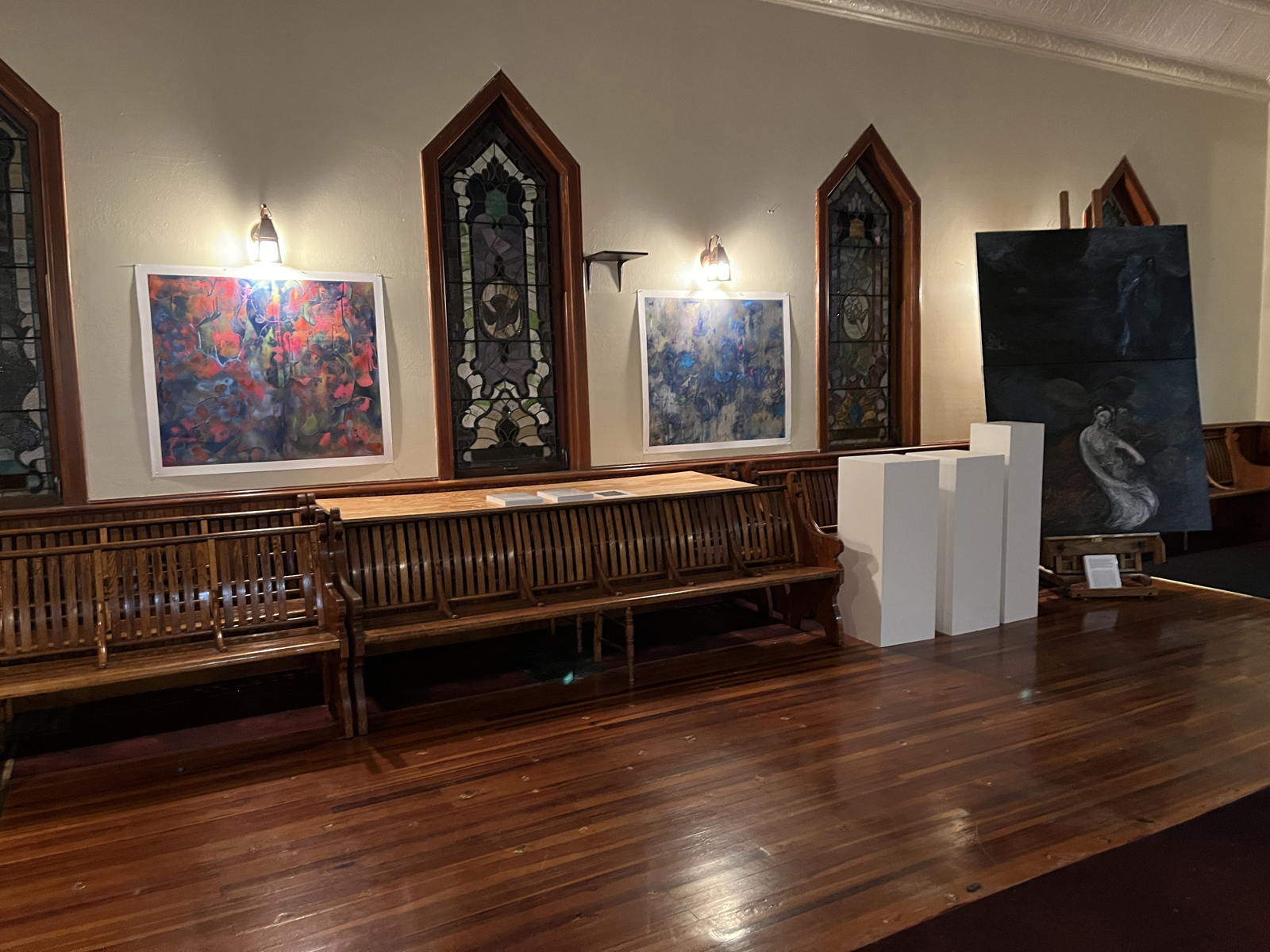 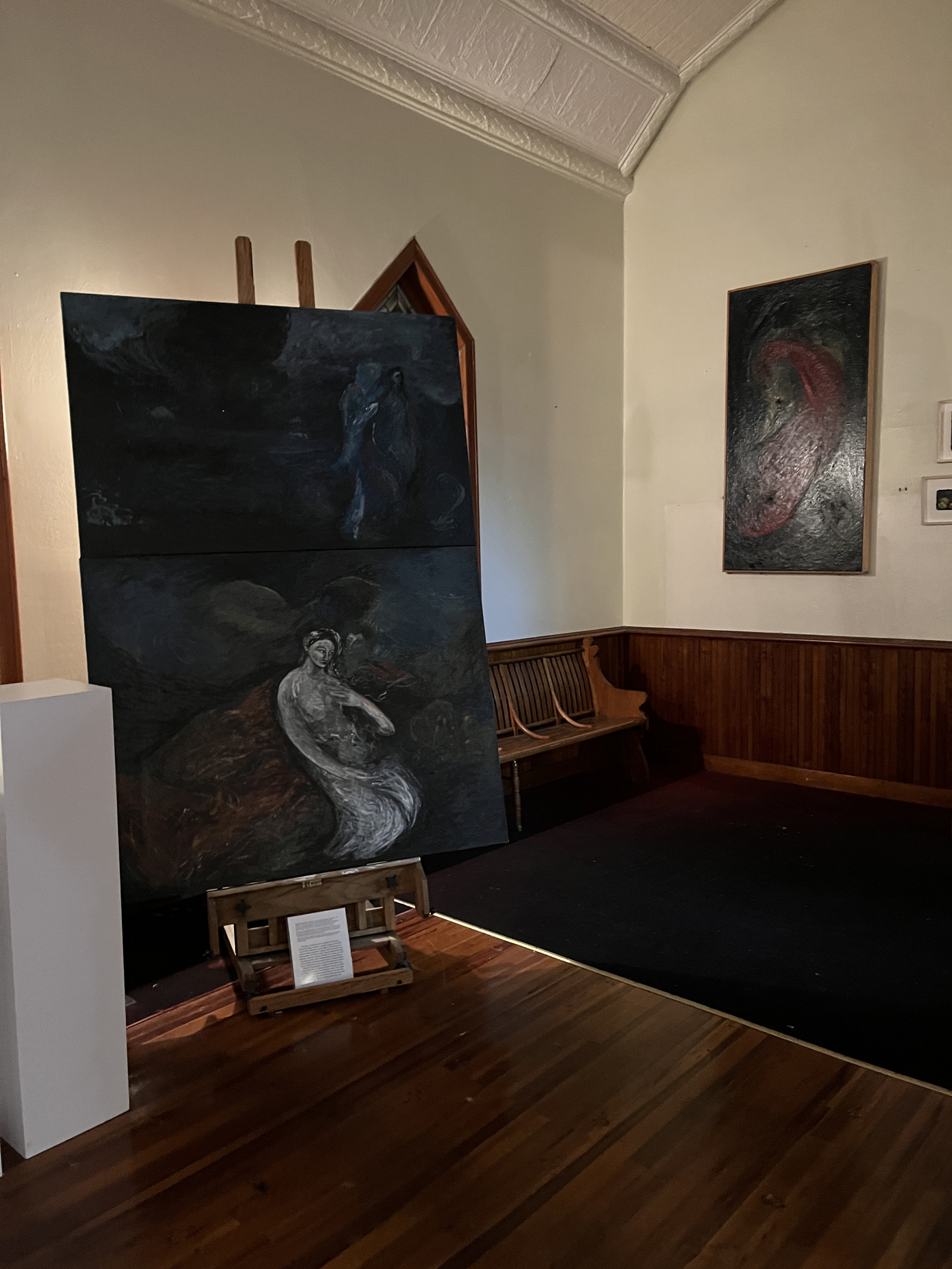 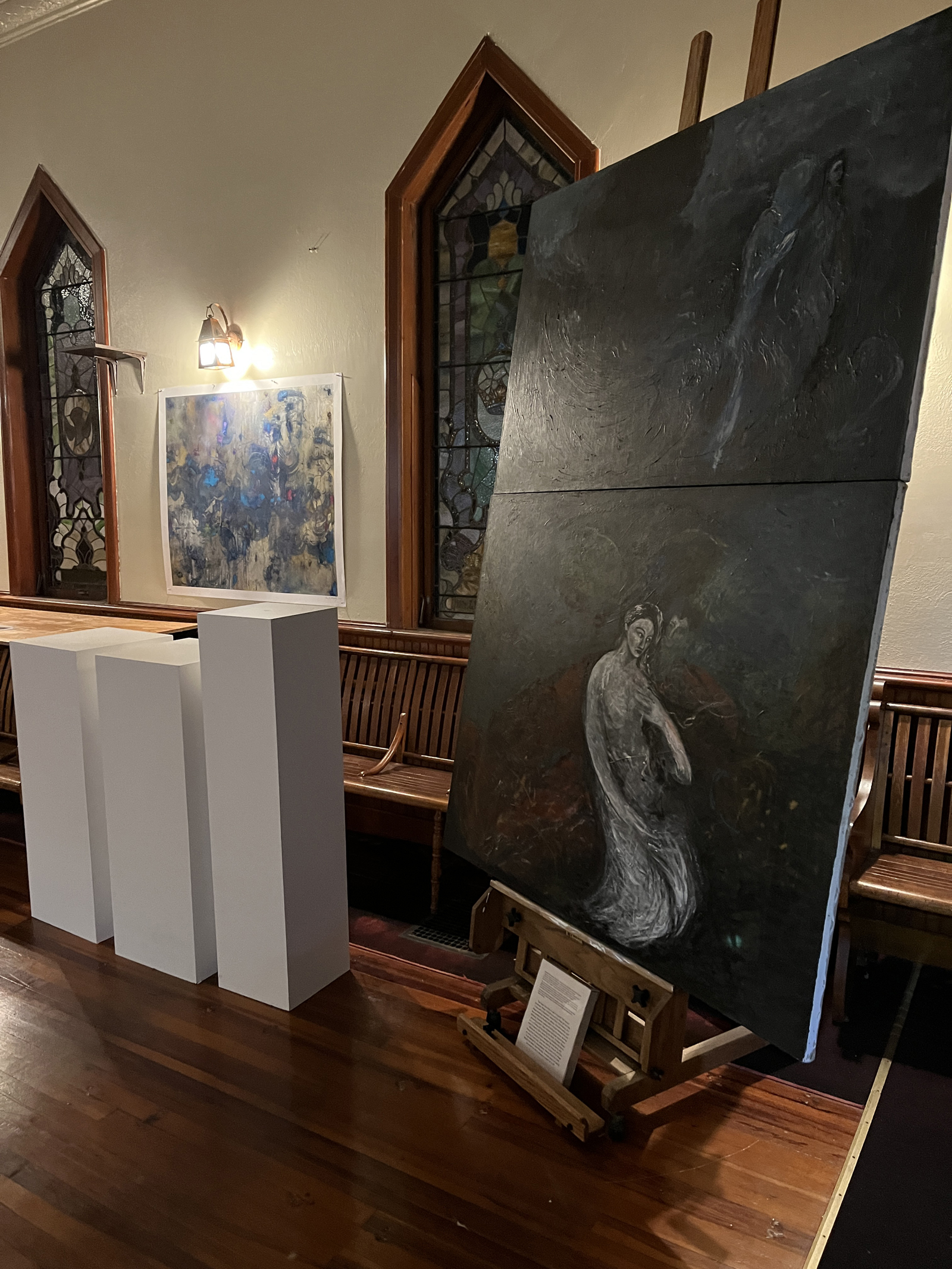 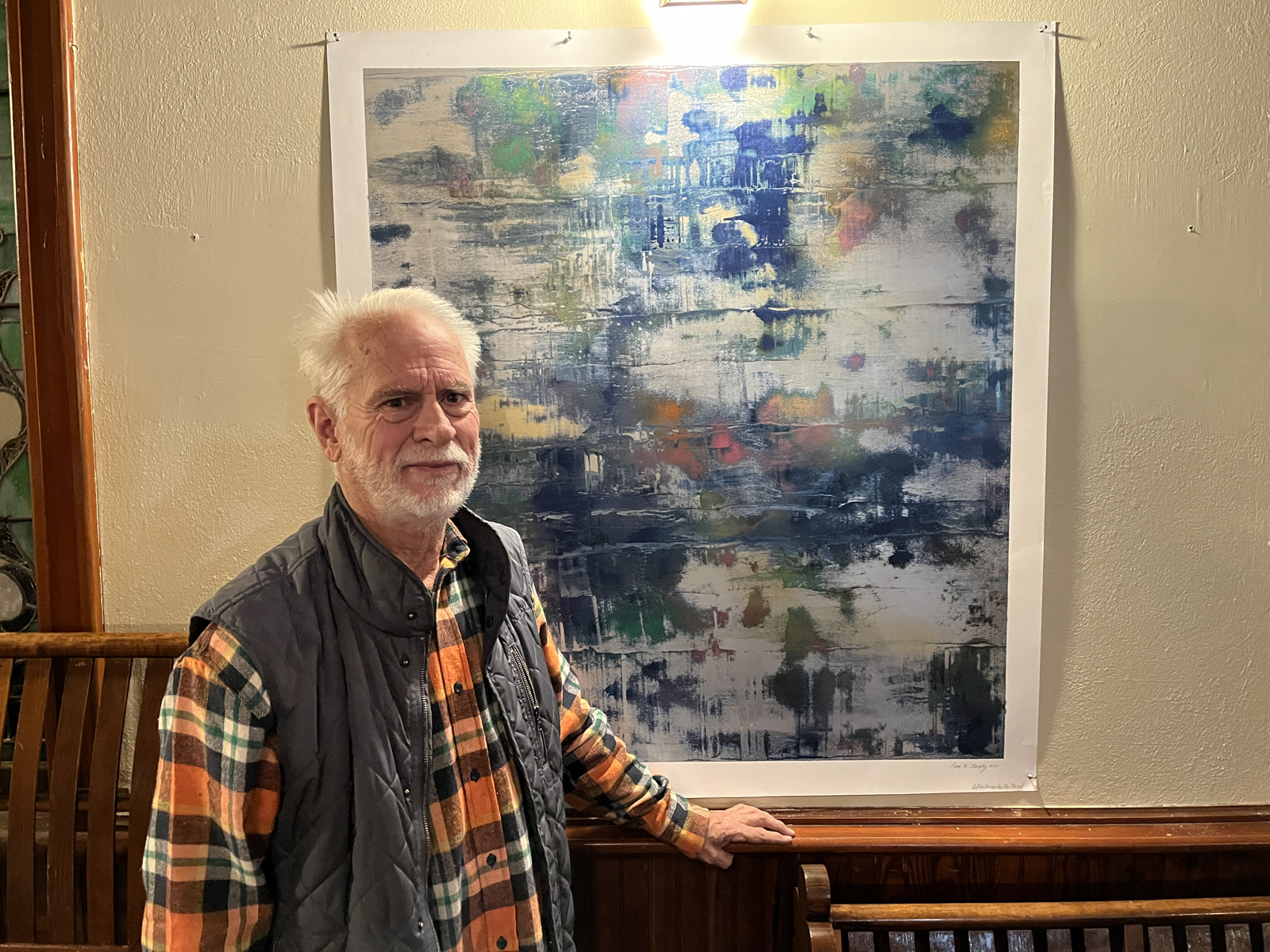 Texas native, Bruce Murphy, will exhibit a new series of paintings using his preferred materials of enamel paint and various metallic powders. Over the years, we have seen Murphy’s abstract color composition take on characteristics of landscapes where horizon lines distinctly separate land from sky in minimalist blocks of color. Recently, Murphy has introduced a grid of straight, measured lines that pierce through the expansive color schemes with the implied specificity of an Agnes Martin.

Diaphanous clouds of color are layered within veils of gold and silver metallic powders. A true master of this medium, the artist’s deft application results but also emits from, through and behind the nebula of color. Murphy invents a universe on a two-dimensional plane where his marks and incisions become points in the cosmos.

Bruce Murphy obtained a BFA in paintings from the Parson’s School of Design in New York City. After a long career in graphic design, he now lives in Rhinecliff, NY and devotes himself full-time to his art. 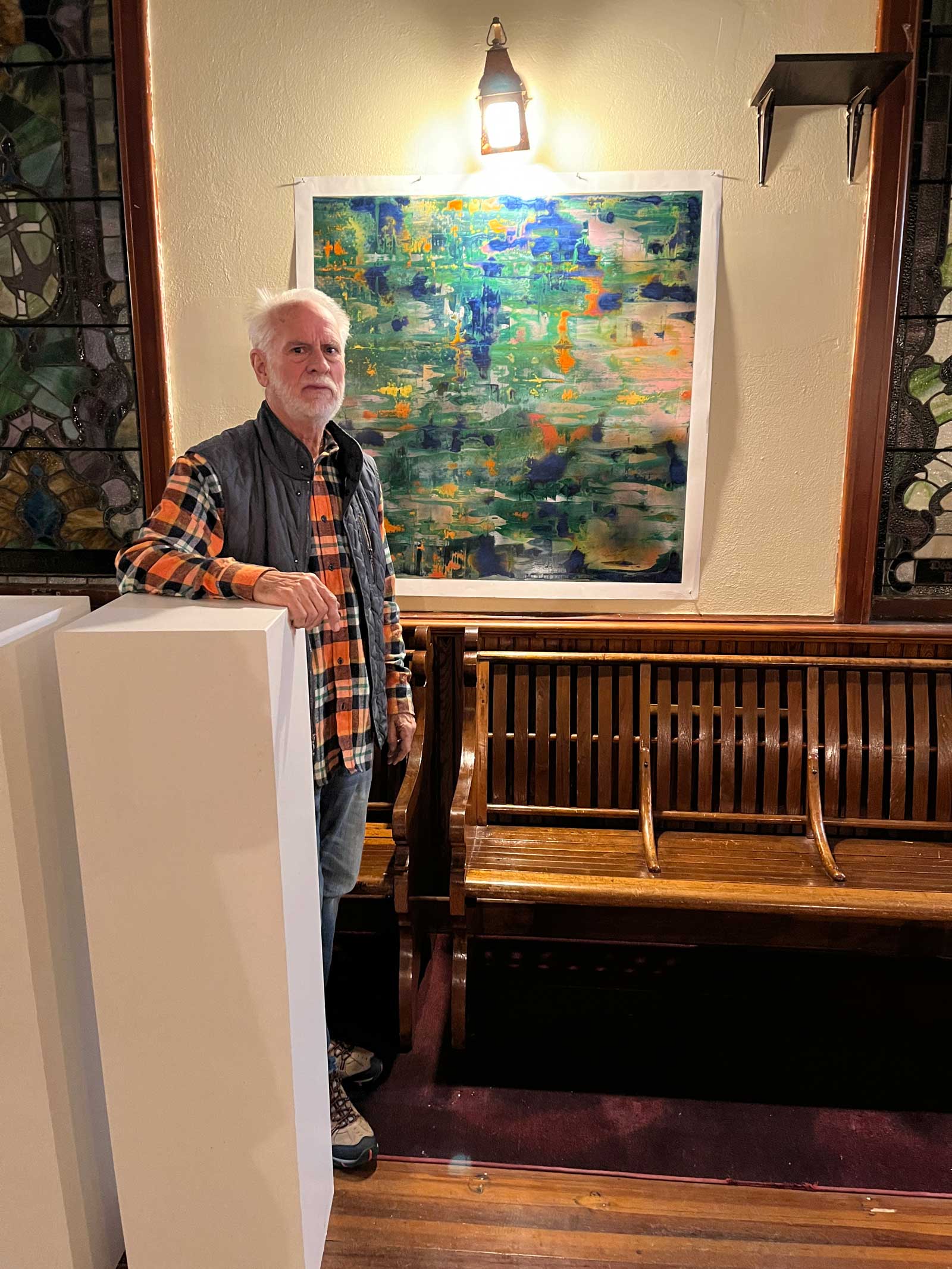 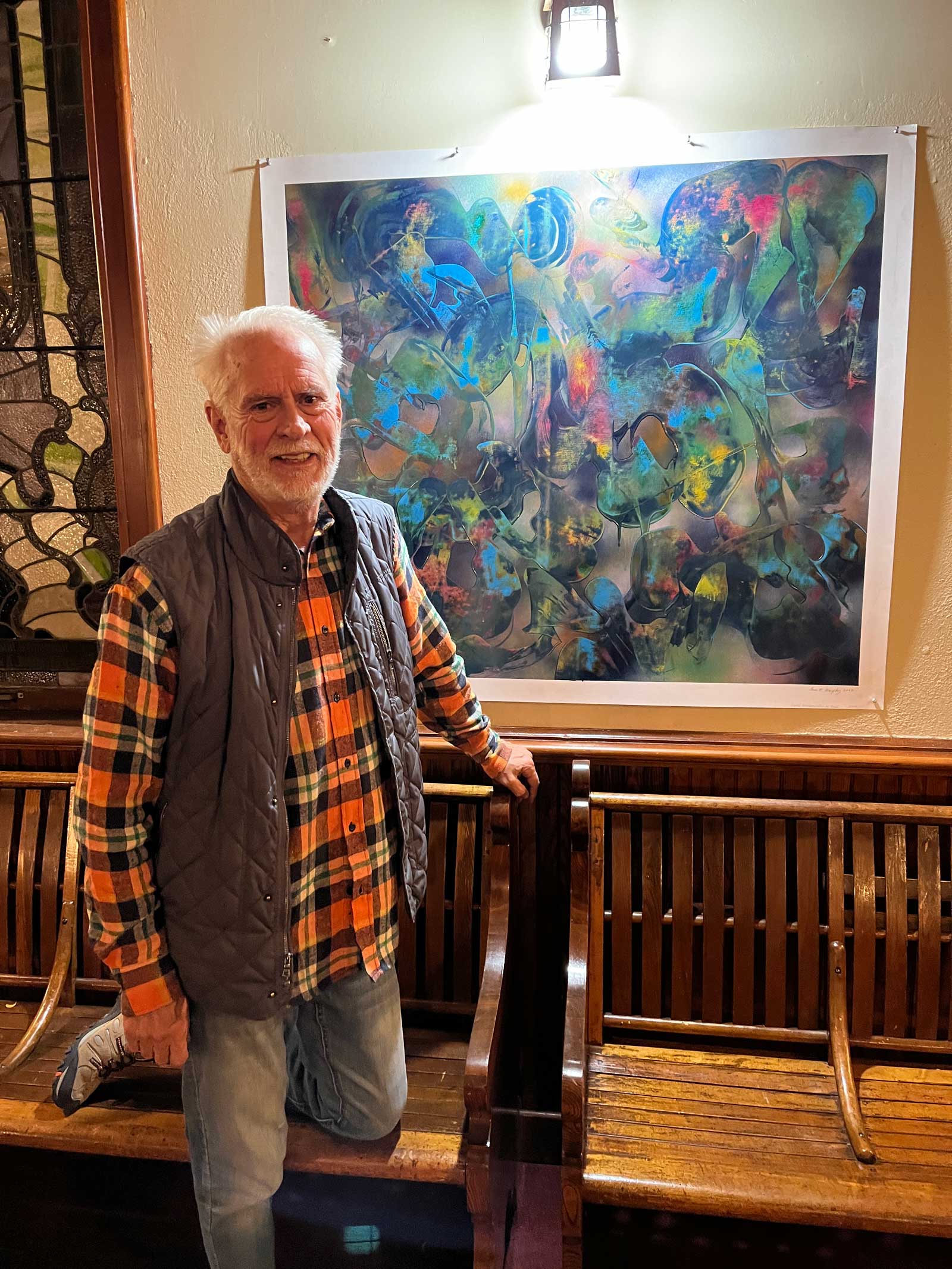 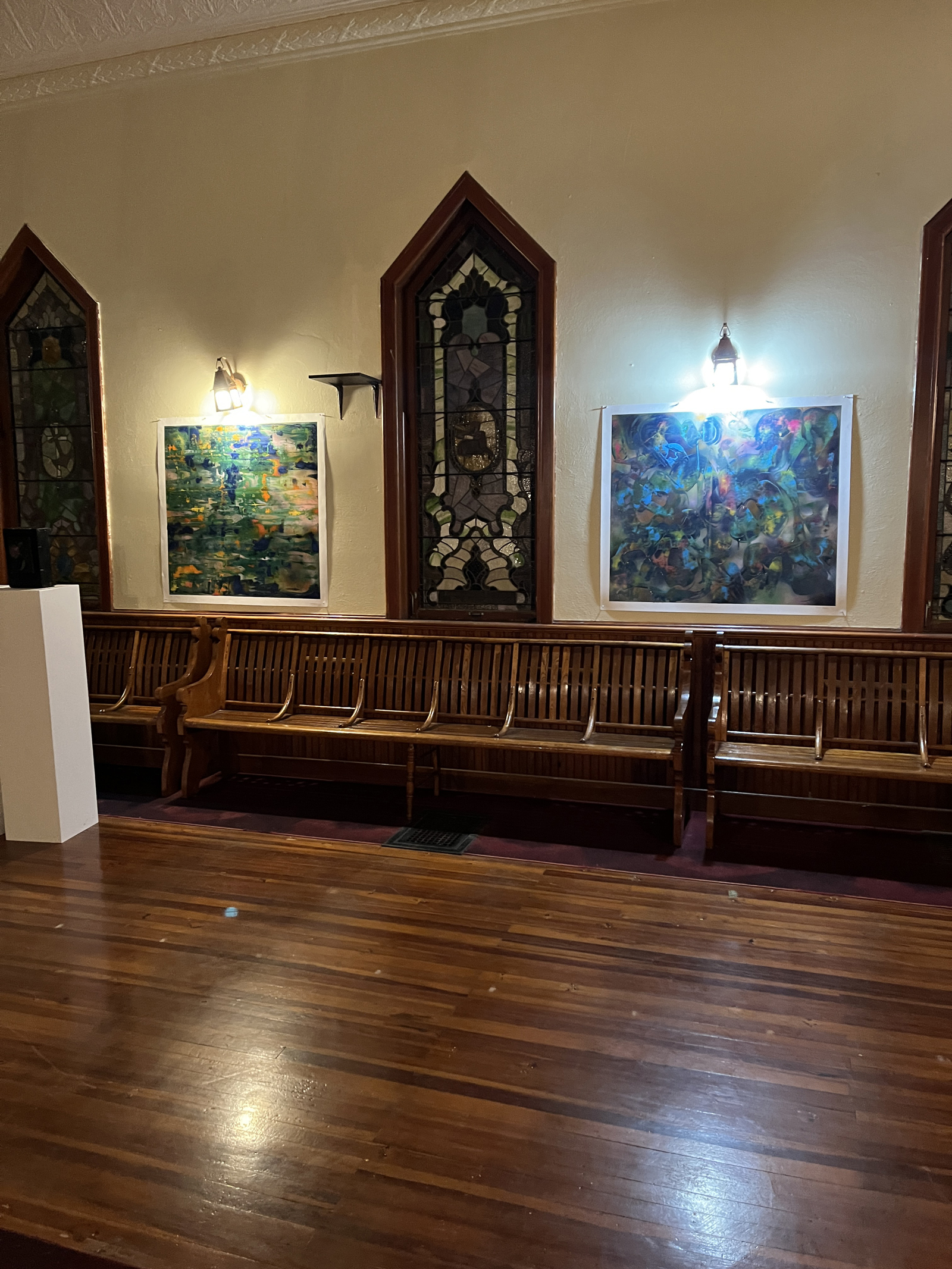 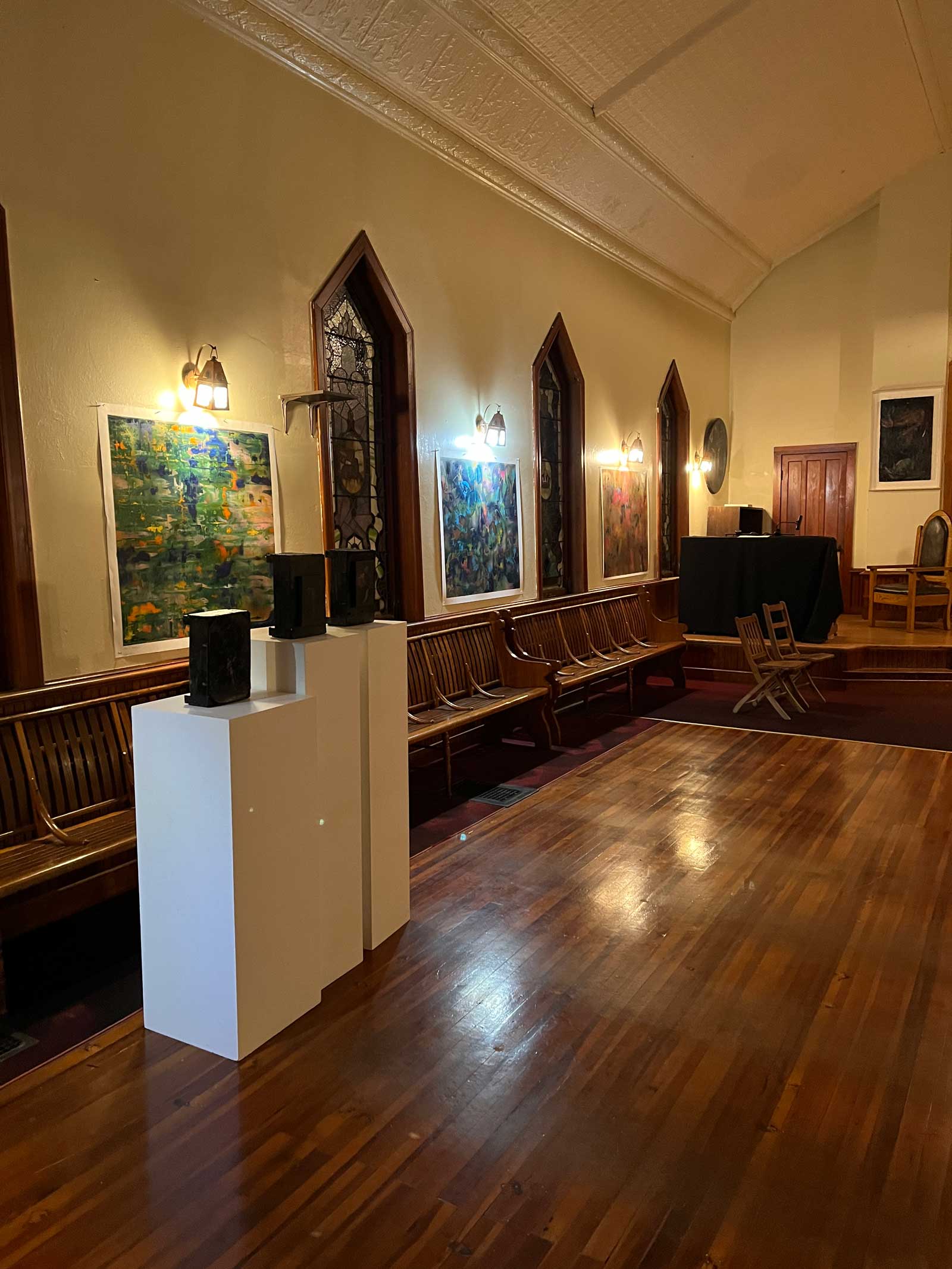 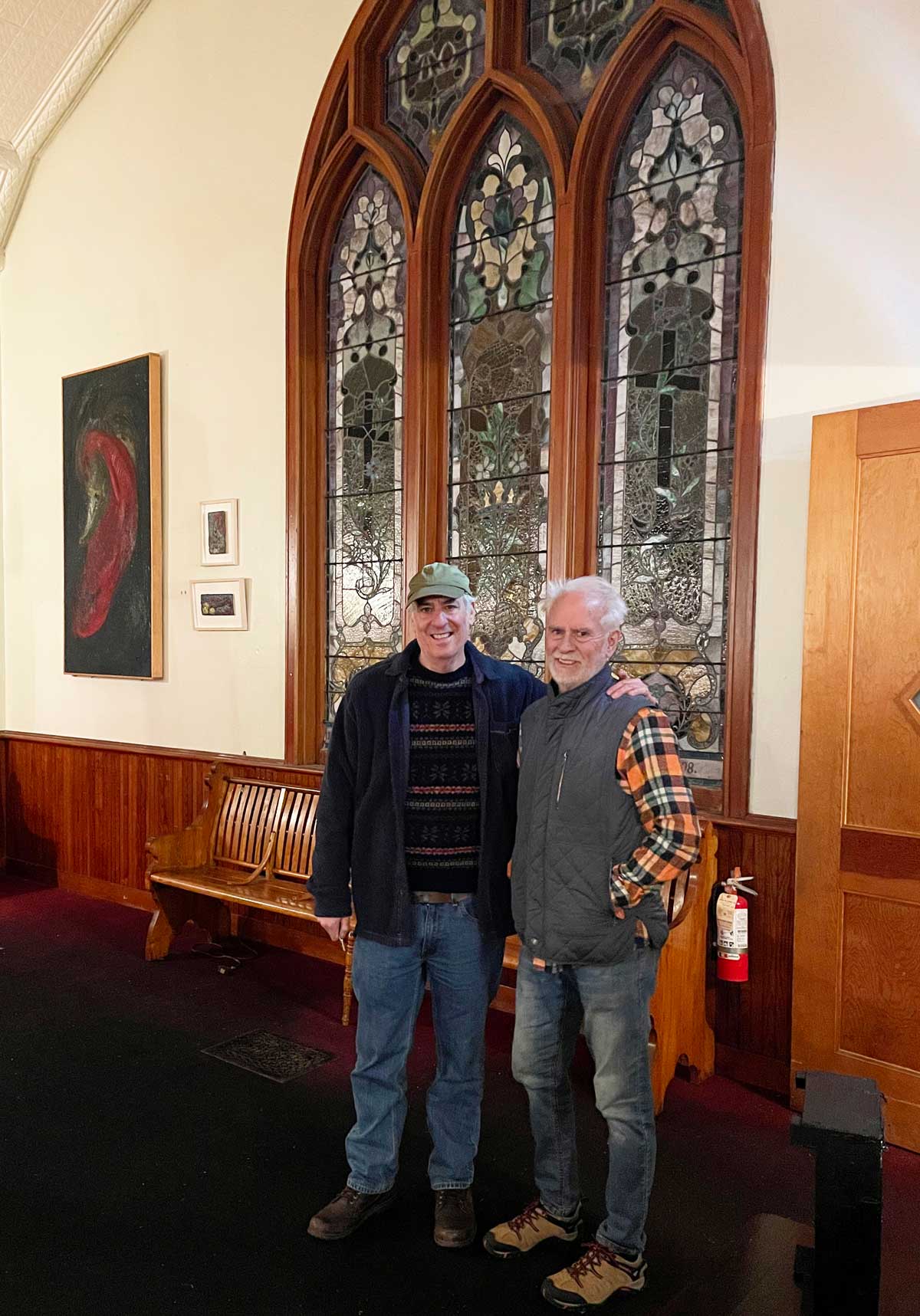 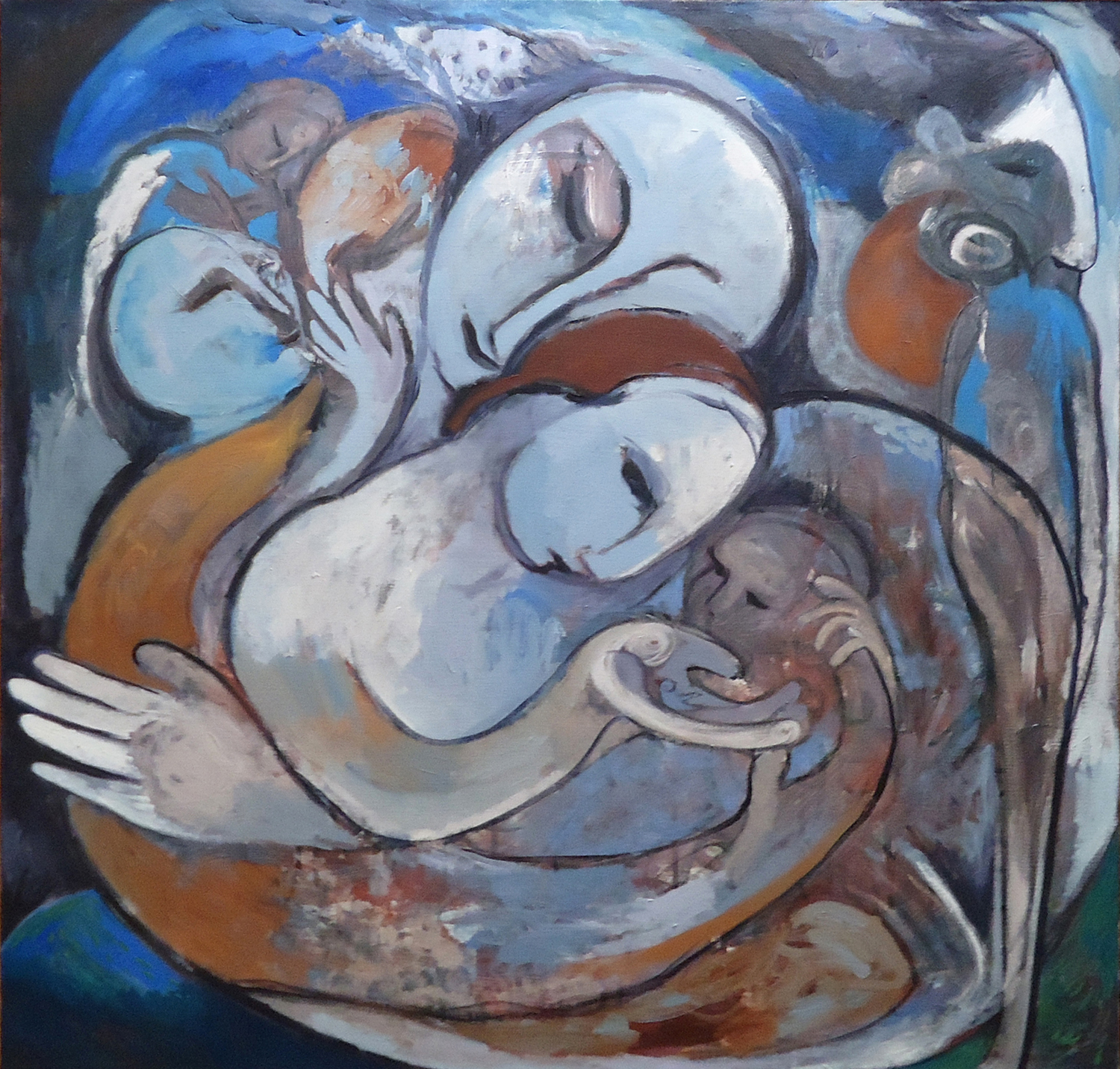 Ani was born into an Armenian family in Marseilles France. Her family came to America when she was very young. She grew up among artists and loved her ethnic Armenian music, delicious foods and loving family, which was the first muse into her passage for the passion of painting. She studied at the High School of Music and Art, and received the Nessa Cohen Award from the Arts Students League in New York to study at The New York Studio School with painter and mentor Nicholas Carone.

Today she is blessed with parenthood to her beautiful daughter and muse Maia Jillian, who is now twenty years old and an opera singer and is married to artist and painter Steven Weiss. 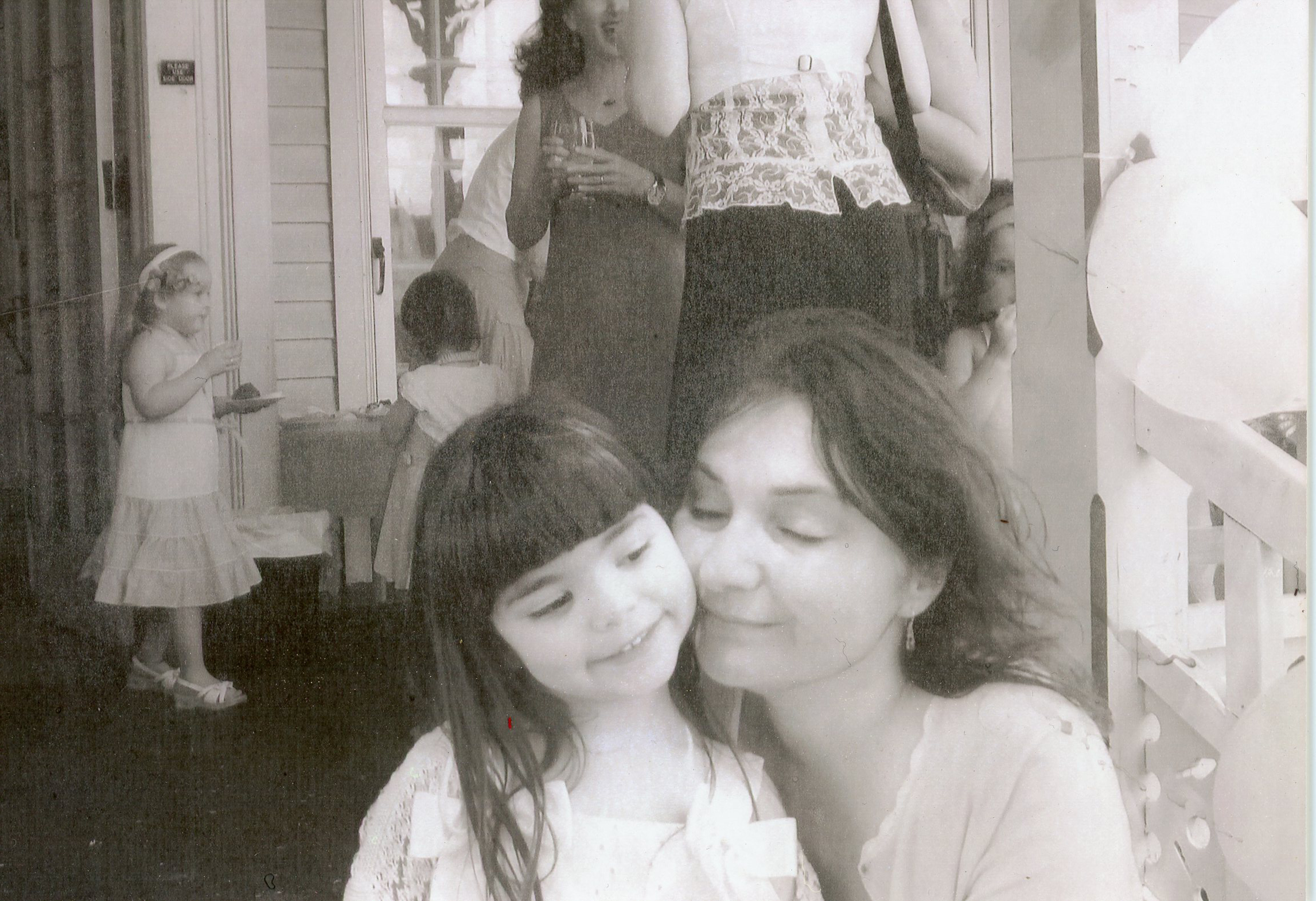 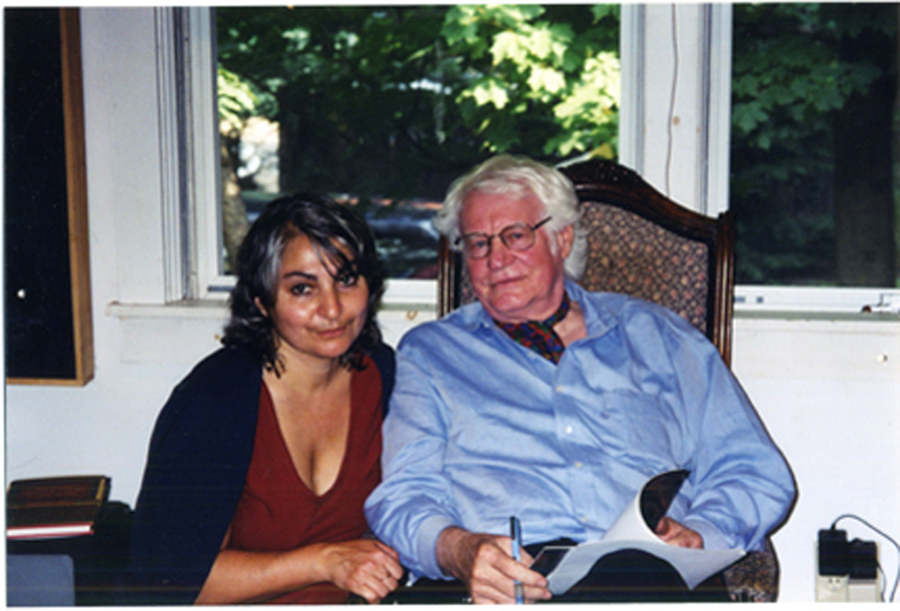 Ani with Robert Bly in her studio

When visiting Ani and her paintings, poet Robert Bly compared her archetypal women to the women adored in Hafiz’s and Rumi’s love poems. 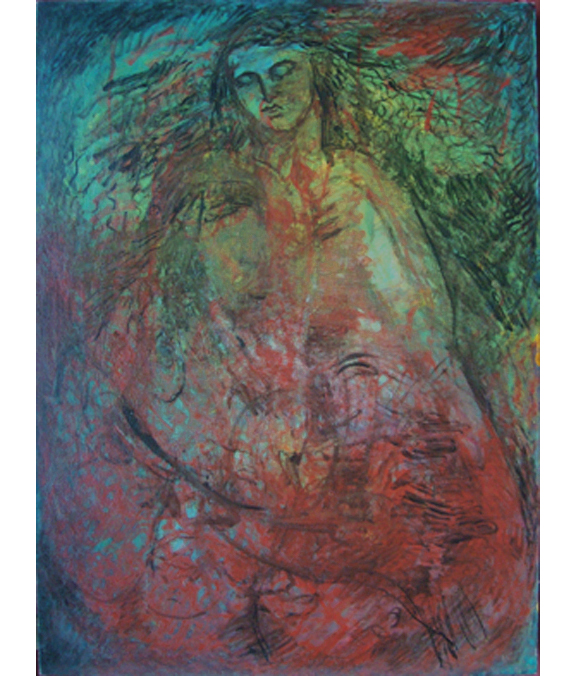 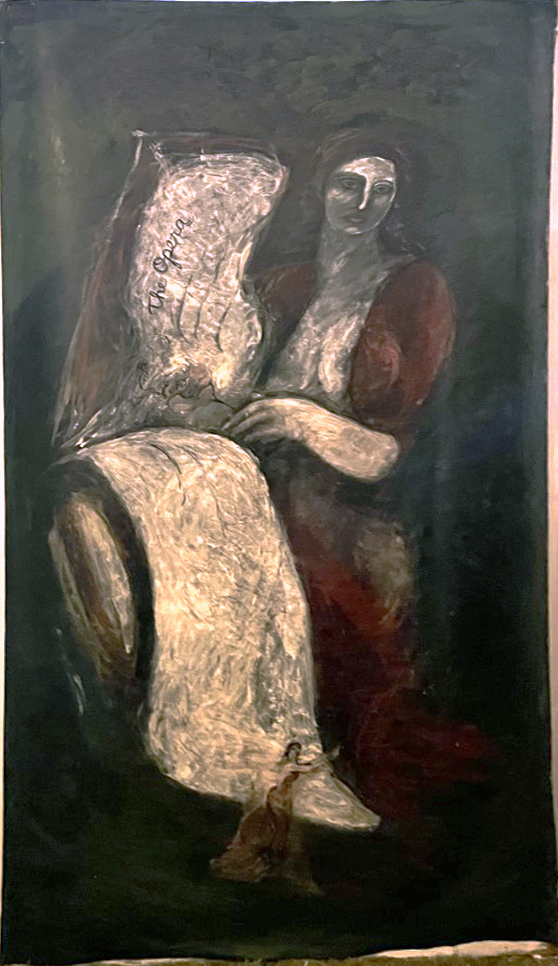 “My work is the process of the removal of veils induced by society; thus allowing the penetration of the essence and origins of the work itself. The paintings begin with no preconceived image or idea; only a profound and persistent emotion, which is the actual beginning. These images and emotions develop and unite to form a synthesis which brings to consciousness that which I was in touch with and which needed to be understood.

Having a strong belief that we are more than we know, the process allows me to go beyond the limits of knowledge and to be accessible to that which I am only vehicle.”
Steven Weiss 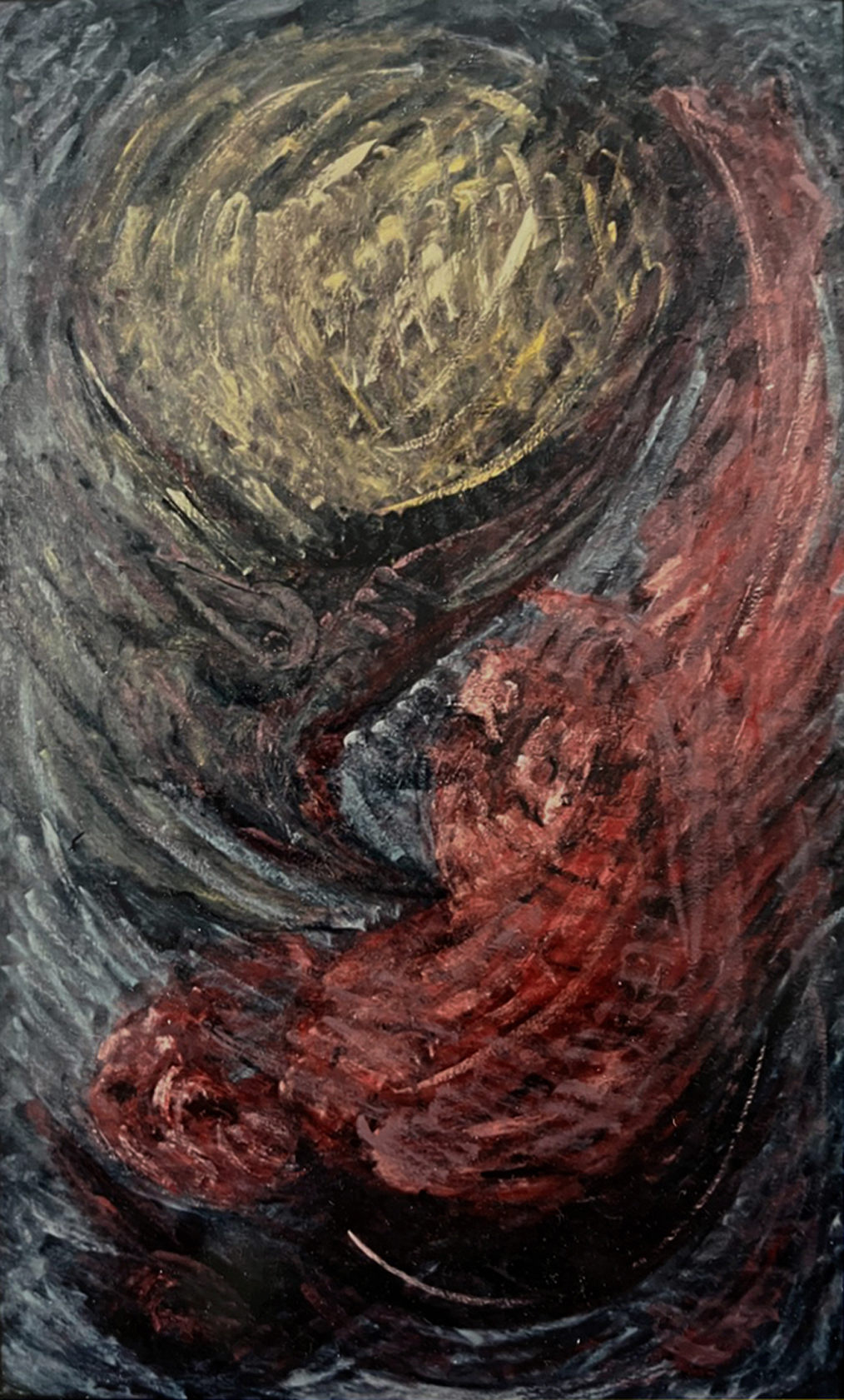 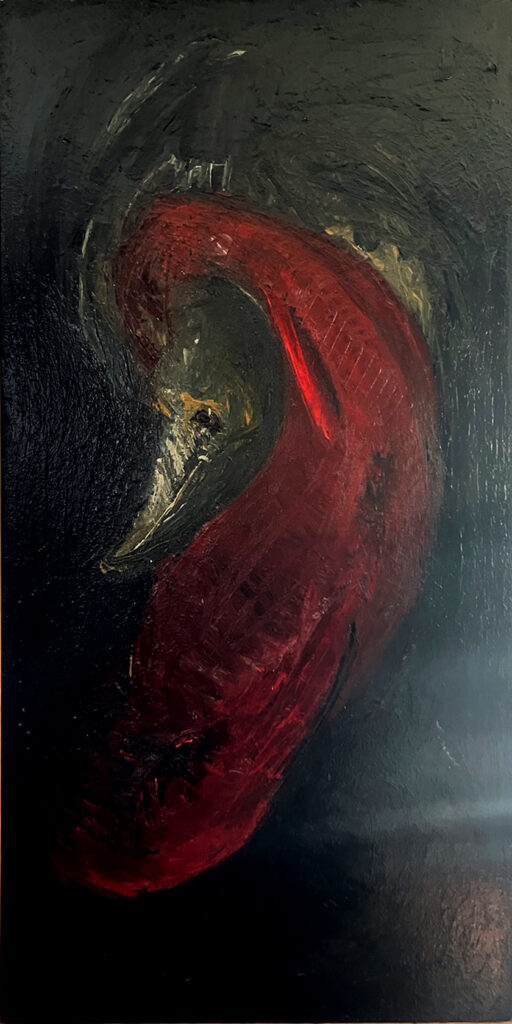 Behind the Face by Steven Weiss oil on canvas 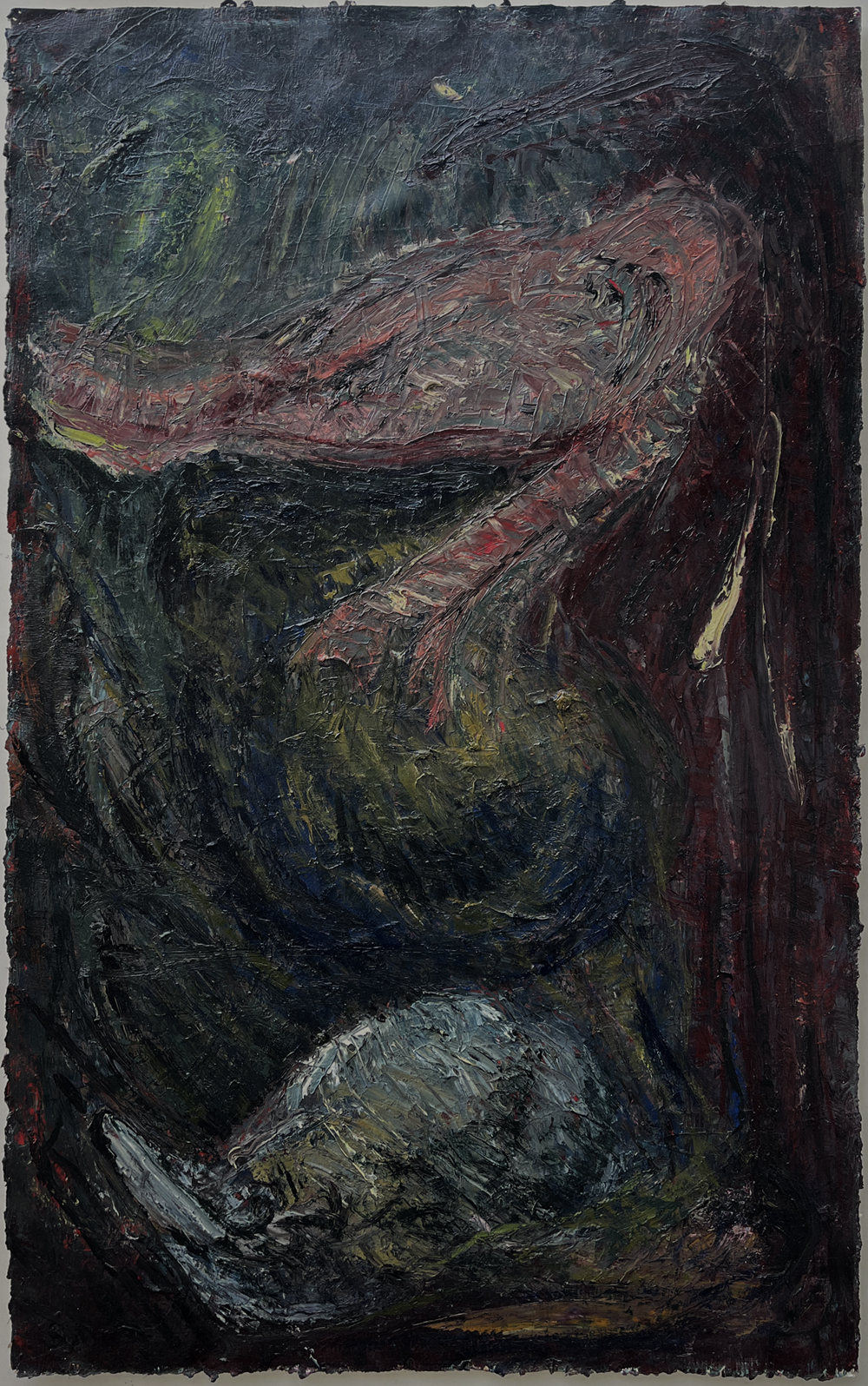 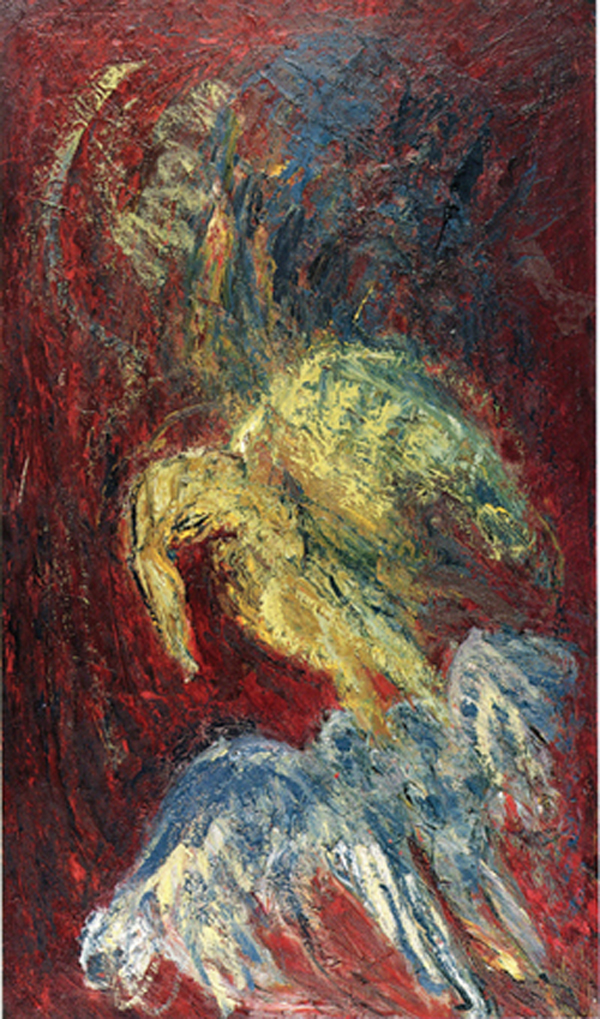 While our mission is to primarily focus on the vocal arts and its different usages and facets, we believe that arts in general are intimately intertwined, influence each other, and serve a same purpose in our society. Therefore, we do want to continue to present artists every year in our field and we hope during the year at our new Community and Cultural venue.

Olexa Casanova is an American artist of Ukrainian background, residing between Brooklyn and the Catskills.
My work is mainly abstract landscape and seascape paintings that deal with subjects of nature, its beauty and power, but are also representational of the turbulence in our world: our disregard and disrespect to nature, our planet, our home. It’s also an expression of personal internal turmoil caused by current events, which oftentimes feel beyond our individual control, such as war, civil injustice, and hate, that continue to plague the world we live in.
olexacasanova.com 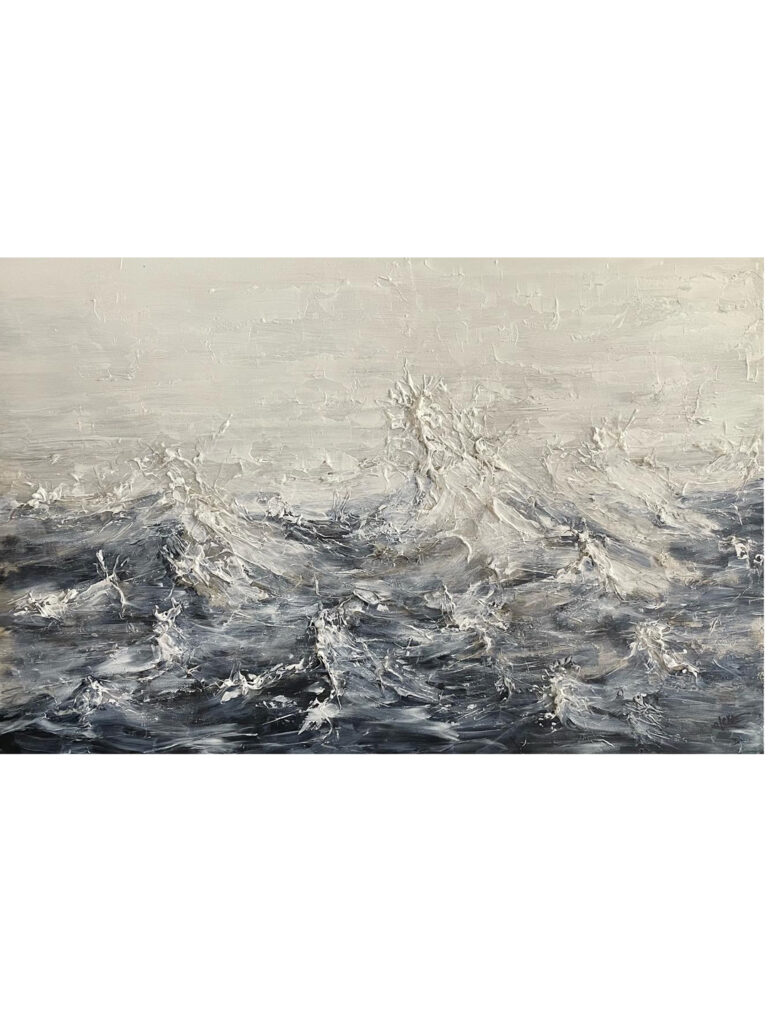 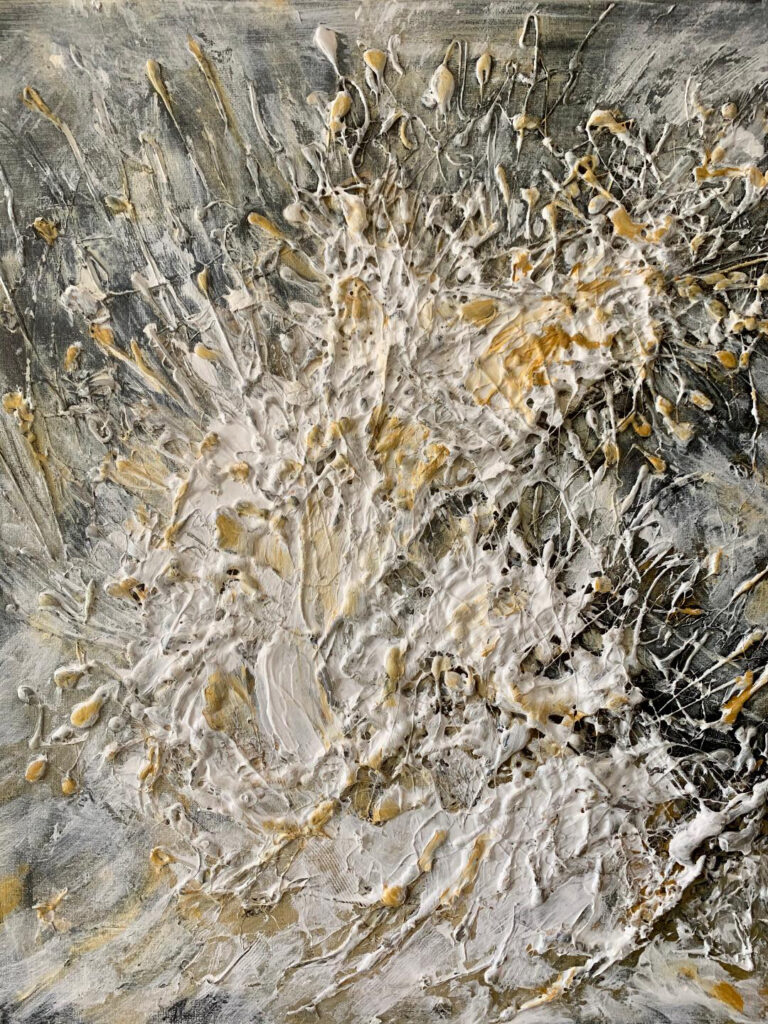 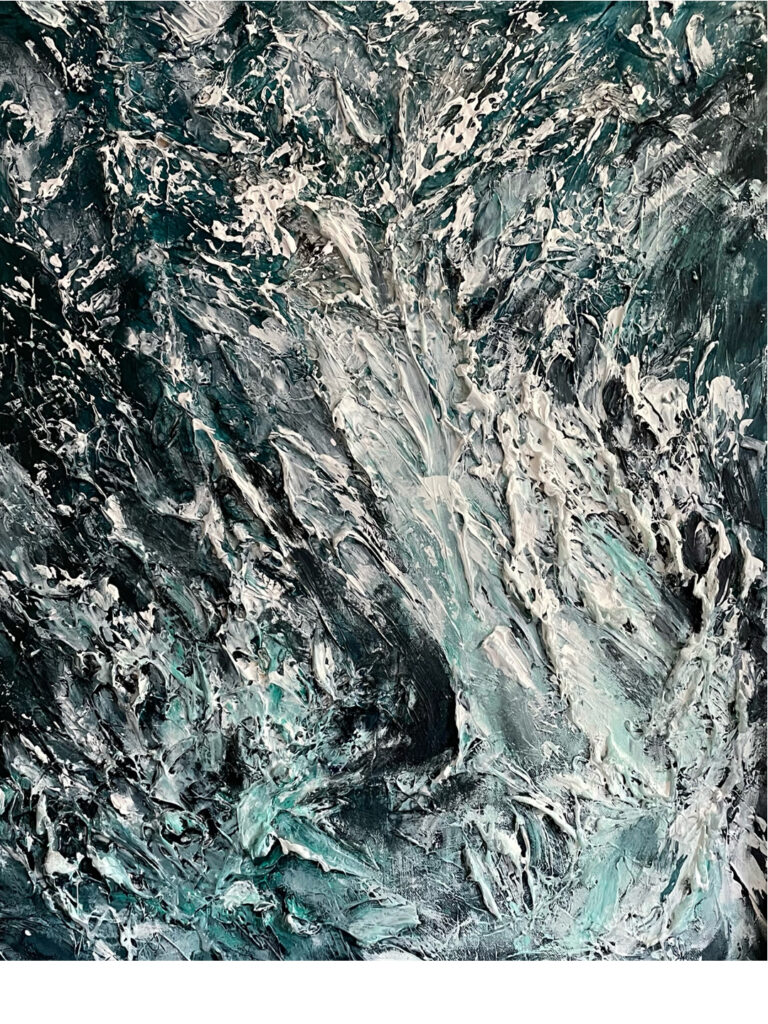 Igor Sokol is a Ukrainian born artist currently based in New York City, working in painting, as well as sculpture and design. Having spent his childhood in Rivne, Ukraine, his early experimentations with art were through creative problem solving: crafting, mending and replicating items that were inaccessible to him at the time. As his skill and fascination with visual art and design grew, he took painting classes and later worked as a graphic designer while earning his BFA from the Institute of Arts at RSHU.

Sokol’s work is a navigation of observations in his present environment, informed by the memories and values he gained while living in Ukraine. His abstracted paintings are inspired by organic forms, combinations of colors, and the vastness of the ever-changing sky. Aiming to capture the beauty and significance of simplicity in daily life, Sokol reduces his subjects to what really matters, resulting in balanced and airy compositions. Nothing describes his beliefs better than a quote by sculptor Constantin Brancusi, “Simplicity is complexity resolved”.

Igor Sokol’s paintings have been exhibited in galleries in New York, he had a solo show “Reflection of Time” at FRIEDAcommunity in Philadelphia, completed an artist residency at Unruly Collective in Brooklyn, and held multiple painting and drawing workshops. Aside from private collections, his artwork and designs can be seen in public spaces throughout NYC, and most notably at the Rehabilitation Institute of Chicago. Recently his work and studio were featured on NY1 news channel. 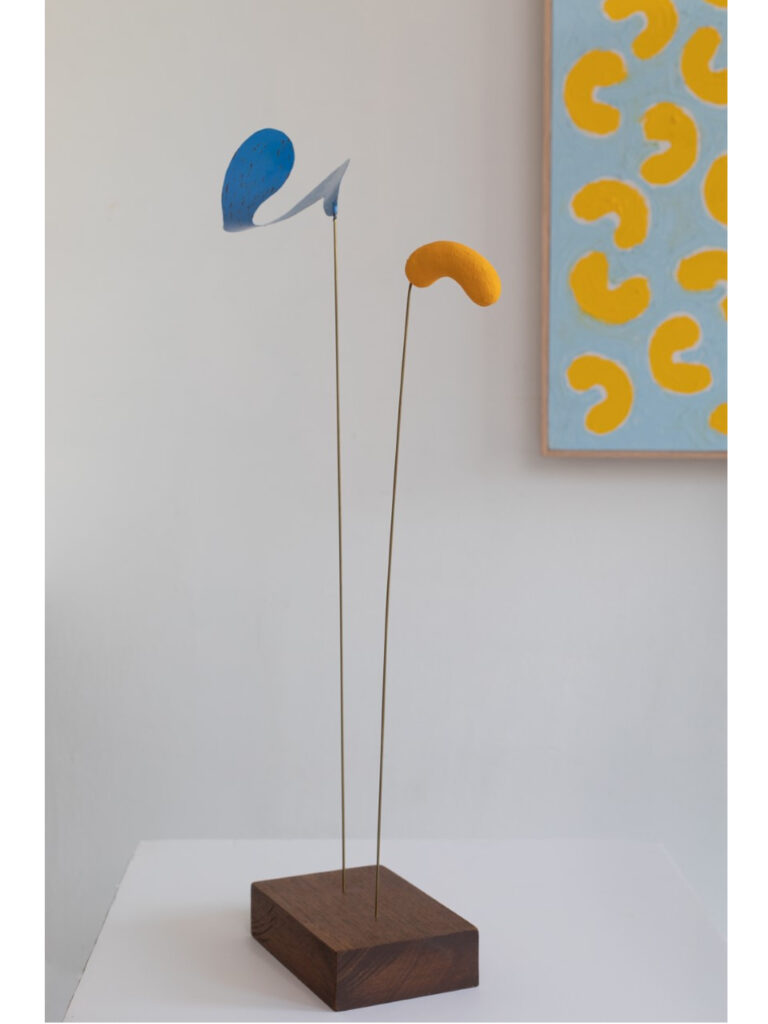 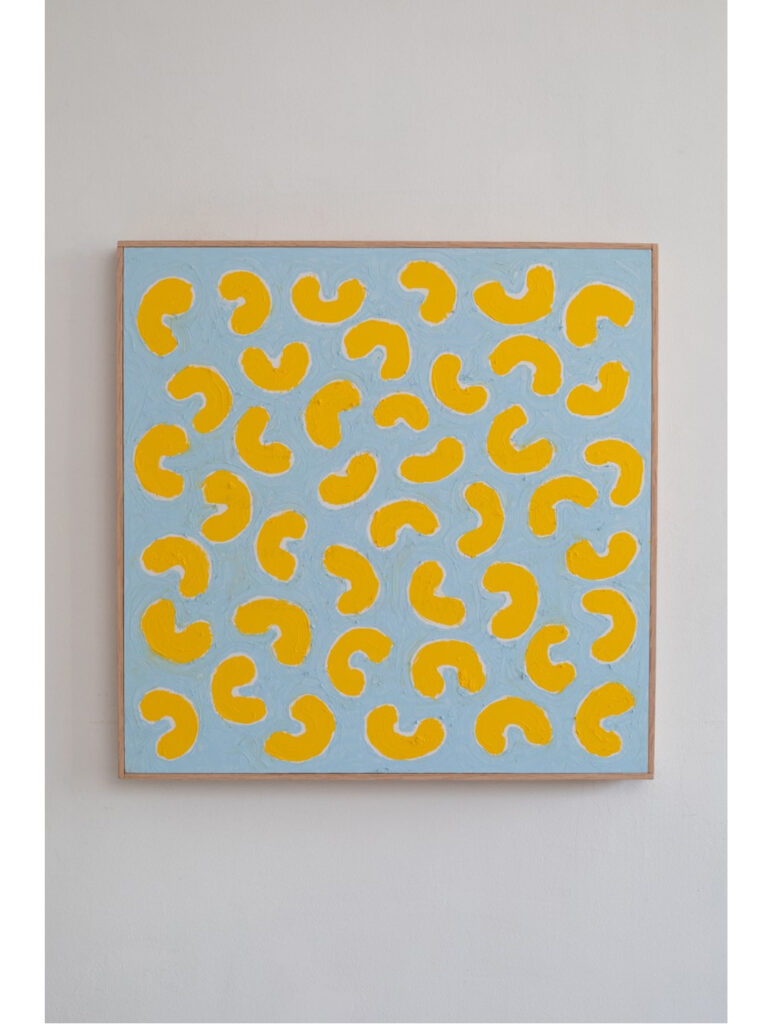 Lesya Verba – singer, artist-designer, songwriter, bandura player, muralist – easily interchanges images and plunges into the atmosphere from music of Art Deco era, progressive nude urban jazz and a feminine mixture of cultures in the spirit of Berry Sisters.
Performs songs in Ukrainian, Russian, English, Italian and Yiddish.
In 2020, the album of author’s songs “Golden” was released in alliance with the lyrics author Marianna Kiyanovskaya (winner of the Taras Shevchenko’s National Prize of Ukraine).
Soloist of the Odessa-Kiev project “Favorite Songs of Utesov”, soloist of the municipal jazz big band, actress of the extravagant cabaret show “Co Co L’Amour”, actress of the theater of absurdity “House of Clowns” (Odessa)

From the beginning of her vocal career, Lesya performed for the Most Serene Special – the Prince of the Principality of Liechtenstein, His Serene Highness Maximilian (2009, Moscow), at the opening of Kazantip (2008), behind the choir and even in the women’s colony.

As an artist, Lesya Verba burst into the highest echelon of the national avant-garde in the early 2000s with painted “blankets” in a unique author’s textile technique, and with vocal performances. An unknown person from Odessa was immediately admitted to the creative association “Gazgolder”, and the first exposition was presented at the Biennale of Moscow Contemporary Art in the project “Believe” (curated by Oleg Kulik). Personal exhibitions and concerts – from ethnic jazz to electronic experiments. Her works are in private collections of the living classic Peter John Greenaway (Great Britain) and a top model Sasha Pivovarova (USA) .

The author of the musical mural on Brass Music Theater. Salika – participant of the international project “Odessarium”, 2018.
The author of the mural in Kiev on Andreevsky Spusk based on the Ukrainian classics by Mikhail Staritsky “Chasing Two Hares”, 2019
A vocal video performance dedicated to Alexander Vertinsky (Odessa, gallery “Invogue Art”, 2020) has grown into a large-scale exposition – the project “I’mGrand / t” and is presented at a personal exhibition at the Odessa Museum of Western and Eastern Art.
In 2020, she creates a unique self illustrated album – a collection of songs “The History of Not Odessian Songs” with anthology of songs and lyrics, sheet music and a CD, where she performs these songs with the Odessa Klezmer band. After leaving Odessa, she becomes a member of the Writers Union of North America.
In 2021 Lesya creates a mural dedicated to Vladimir Zeev Zhabotinsky in Odessa by request of the Embassy of the State of Israel, the project “Art speaks History” (Ukraine-Israel)
Before her start of new life in USA, she leaves as a gift to her native court yard a mural dedicated to the writer Arkady Lvov, who also lived at this address and immigrated to New York in early 70’s.
In New York in August 2021 I was a leading singer in the “Yara-art group” – La-MaMa theater in the play “A Thousand Suns”, director Virlana Tkacz, dedicated to the Ukrainian writer Lesya Ukrainka.
Also participated in the project #StandwithUkraine which was organized Yara Arts Group and The Ukranian Museum, director Virlana Tkacz.
A regular participant in the events held by the Union of Ukranian Women of America (NYC), Spilka NYC, Theatre Group Anomalous Co.
Leading singer and actress in the play “Radio 477” (June, Auguest 2022) director Virlana Tkacz. 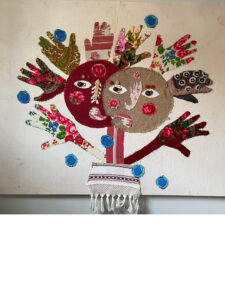 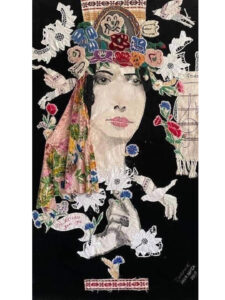 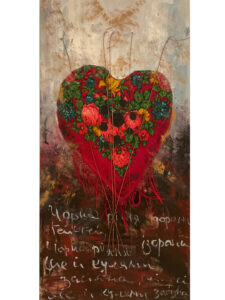